I wasn’t planning to write to you this week, but you have sort of demanded it. I had another letter planned. I have a longish list of writers to write to, and you are among about a dozen highlighted names – the big guns – the letters that are going to need to be epic. One doesn’t just whip off a quick letter to Shakespeare.

Well, screw it. It’s happening. Rilke will have to wait his damn turn. It’s your 400th birthday, and your spirit is a-movin’. You have been in the air. In the last week you have been in my face three times. Four, if you count Google.

First: I live with two teenaged boys. They are exceptionally intelligent kids, and I am the intellectual weak link in my family. Often, though, they will pause their usual talk of Star Wars and quantum mechanics to indulge me in conversation about musical theatre, my cat, and whatever literature they are reading at school. The younger, O, is reading Romeo and Juliet (ah, grade ten English!), and his daily updates as he discovers the play are quite wonderful. He likes it a lot better than A Midsummers Night Dream (sidebar: when I asked him what he would like his name to be on this blog his response was ‘Demetrius’. Amazing, but I’ve decided against it. Since I played Helena, it is a loaded name for me). He is enjoying the drama, the language, even, I suspect, the romance. It is interesting to observe a 15 year old boy engage with you in such a sincere way. I am touched that he wants to engage with me on the subject. R&J is actually one of my least favourite plays of yours. I don’t see it as a great love story. I see it as teen lust gone bad. I’ve outgrown that, thank God. I will freely admit, though, that when I was a lusty teenager I memorized the balcony scene and would casually recite it in the hallways of my high school, hoping to impress the football team. Needless to say, not an effective strategy. It would have worked on me… 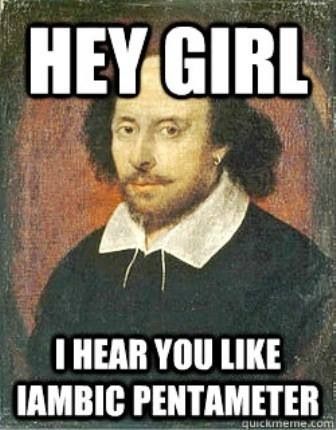 Second: Maybe inspired by all the breakfast Shakespeare talk  with O, I quite spontaneously booked a summer trip to Stratford, Ontario, home of the amazing Stratford Festival (and, to sully things, birthplace of Justin Bieber). Among the plays I chose is the stage version of Tom Stoppard’s amazing screenplay, Shakespeare in Love. Here, I will admit that I have replaced all known images of you in my mind with Joseph Fiennes, who plays you in the movie. Maybe you really were this hot. Who knows.

The third thing happened yesterday, and I can say next to nothing about it because it happened while I was judging a student writing contest. I came upon a piece inspired by you, featuring you, and it was so clear how inspired the writer was by your work. It was wonderful to see you brought to life by a young voice, to see young people so hungry to understand who you were. I read this yesterday, absolutely randomly, and only learned later in the day that it was your birthday. You see? You forced yourself onto my radar.

Or maybe it’s just that you are still everywhere. There are debates as to whether you are still relevant. I don’t understand this. I think that most people would name you if asked who was the greatest writer of all time. At the very least, your legacy has been vibrant and lasting. 400 years and high school students are compelled to write about you. 400 years and we are still scrambling to get good seats to your plays. 400 years and you are revisited, reimagined, you are inspiring new works from today’s artists. 400 years and we are as enchanted as ever. You should know that your birthday overshadowed the Queen’s. I think that would please you. 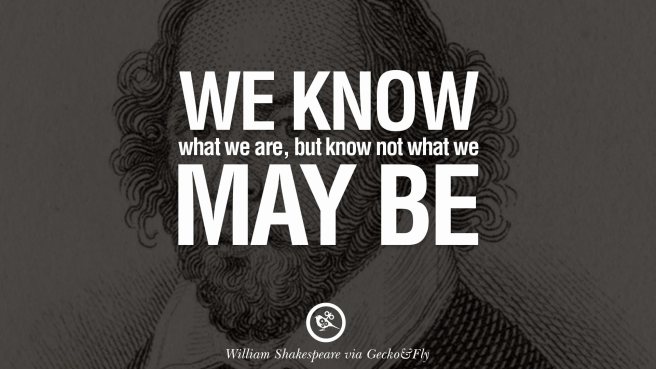 The truth is, we don’t know what day you were born. You were born about 453 years ago. What we are remembering on April 23rd is the anniversary of your death. What we are celebrating are your words.

We have much to discuss. Everything, really, when you surmised such a clear and poignant understanding of what it is to be human. We will speak again.